Throughout the years, the Lord has brought many changes and growth to our church at Paya Lebar. With a rich heritage behind us, we want to remember God’s Mighty Hand every step of the way. 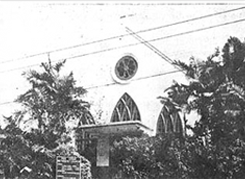 Paya Lebar Methodist Church was established on 10th July 1932, with the transfer of a few members from Wesley Methodist Church, and the Straits Chinese Churches. At our inception in 1932, we had only 18 full members on the roll.

Rev Abel Eklund conducted the inauguration service in a shophouse chapel at 166D Upper Serangoon Road. Through our missions work and the day-school (Methodist Preparatory English School), funds were raised and a four-room Church was built at 7 Boundary Road.

The Malay Prayer Service was started. The Malay Sunday School had about 70 students. The Peranakan Service was later introduced in 1961 and a Peranakan Fellowship meeting on Saturday afternoons was also added.

An interesting feature of the Church Anniversary Service was that members of the congregation decorated the church with gifts which were later distributed to the Home for the Aged Sick, the Retarded Children’s Home and the Chen Su Lan Methodist Children’s Home.

The re-building of the Sanctuary was completed and dedicated to the Lord. Our Wayside Pulpit was launched in 1984 with a “Thot for the Week” and banners were hung on the roadside railing to minister to the public. In the same year, the Filipino Fellowship was started.

The Covenant Centre was completed, officially opened and dedicated to the Lord. This facilitated the launch of the Kindergarten, the Retreat Centre, the Emmaus Centre and the Family Service Centre. In 1988, the Ministry to the Visually Impaired was started. The launch of the Care Group Ministry saw the formation of about 30 care groups.

The Contemporary Service was started on 9 July. Initially held at 5pm and called the Evening Service, it was brought forward to 2.30 pm and renamed the Contemporary Service with effect from April 1996. Its focus from 1997 was to be a Seeker’s Service, the service and sermons aimed to reach out to those searching for God. In August 2001, in an effort to reach the Punggol Community, the service was moved to Punggol Marina and changed its name to Hope Mission.

The pastors each led a class when the Disciple’s programme was adopted by the Church in 1990. The Covenant Prayer and Praise Service began in 1991 and changed its name to “Lifespring” Service in 1995. This later became part of the present 11.15 am Celebration Service, which was officially launched in January 2003.

In 1996, the total re-building of the church began. Worship services were re-located to Paya Lebar Methodist Girls’ Secondary School, whilst the office and kindergarten operated from the former Elling Primary School at 521 Upper Paya Lebar Road. Work on the new church building lasted 18 months and the first three Thanksgiving Stones were laid at the Jordan Hall on PLMC’s 66th Anniversary on 12 July 1998. The first combined worship service held on 25 October 1998 in the new church building saw the Sanctuary packed to the brim as we rejoiced in God’s faithfulness in seeing us through the church building project.

In 1999, we saw the Church moved to be a cell church. Many new cell groups were started, while the old ones persevered. It was an exciting phase of the Church’s life as the entire dynamics of the Church moved towards the lay people. There were also a few milestones in the same year: the Church sponsored the Singapore Boys’ Brigade 6th and 75th Companies; the dance and drama ministries were started; and we had our first original musical “Going Home”. In the next year, the “Living Stones” Mandarin Fellowship was started.

Over the past years, we has seen God’s faithfulness and experienced His blessings in many ways. And we believe that we are blessed for a reason, and that is to be a blessing to others. In 2002, we took the former vision of being “A Renewing, Learning, Extending Community” a step further. A new logo was designed for the church and the vision re-defined. The new vision now reads, “As the body of Christ, in receiving the anointing of the Holy Spirit, we respond in worship, walking in His word, and reaching our community and the nations with the love of God.”In 2002, as we celebrated our 70th Anniversary, we also started the “Bless The Nations” project, raising funds for missions work as well as exposing our members to missions through short trips and educational video screenings. With the Blessed To Bless (B2B) and Cell Group departments in place, we also began our community outreach activities and the move towards being a Cell Church. On 23 March 2003, after months of training, the CG leaders were commissioned during the Sunday Services. It was also in 2003 that the Mandarin Fellowship expanded and became the Mandarin Service.

We launched our 24/7 prayer wave, where church members come to the 24/7 prayer room around the clock to intercede for the church.

As a cell church. 1,300 of our adult English members/worshippers are in cell groups where they edify one another, exercise the gifts of the Holy Spirit and evangelise with the love of Christ. We commmited $3.5 million to the concert hall of Paya Lebar Methodist Girls’ School (Secondary), to extend our outreach and pastoral care to the school and community at Lor Ah Soo. In 2006, our weekly Worship & Intercession Night was launched. We held our 1st Cell Church Conference.

The Next Generation (youth) officially launched its worship service at the PLMGSS concert hall on 27 January 2008. The Mandarin Service launched its second service at 9 am on 14 September 2008 and the International Students’ Ministry was launched on 28 December 2008. In 2009, we embraced a renewed focus to be an intentional disciple-making cell church, encapsulated in our new Mission statement – “We exist to glorify God and make disciples of Christ”.

On 8 Jul 2012, the Church embarked on a year-long celebration of its 80th Anniversary. There were several noteworthy events that were organized. The Anniversary celebration was held at Singapore Expo and saw about 3,000 worshippers gathered together in one service. The 80-80 Missions initiative saw 126 missions teams and 1169 missions trippers blessing 13 nations in a year. The Church started hosting Conferences with Kingdom-focused speakers like Patricia King, Kris Valloton, James Goll and Teachers from Bethel Healing School.